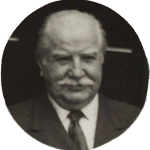 Prime Minister of Luxembourg from 1926 to 1937 and from 1953 to 1958, as well as Minister for Foreign Affairs from 1926 to 1959. An enthusiastic supporter of European integration, he was instrumental in the decision to locate the seat of the High Authority of the ECSC in Luxembourg. He also favoured the creation of the European Defence Community. He represented Luxembourg at the Messina Conference.