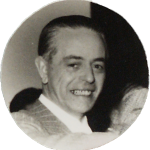 University professor and Minister for Foreign Affairs of Italy between 1954 and 1957, Martino was convinced of the need for European integration to follow the path of economic integration. He was instrumental in the choice of Messina as the seat of the conference (along with Taormina), as it was his city of origin. After the Messina Conference, Martino led the Italian delegation at the Intergovernmental Conference held to draft the Treaties of Rome.